Litecoin kicks off the week with another major jump, putting its year-to-date growth at 4,315 percent.

This morning, Litecoin prices hit $186.87, marking a staggering 29 percent jump in less than 24 hours. At the time of this writing, the price is listed at $186.56 on CoinMarketCap. 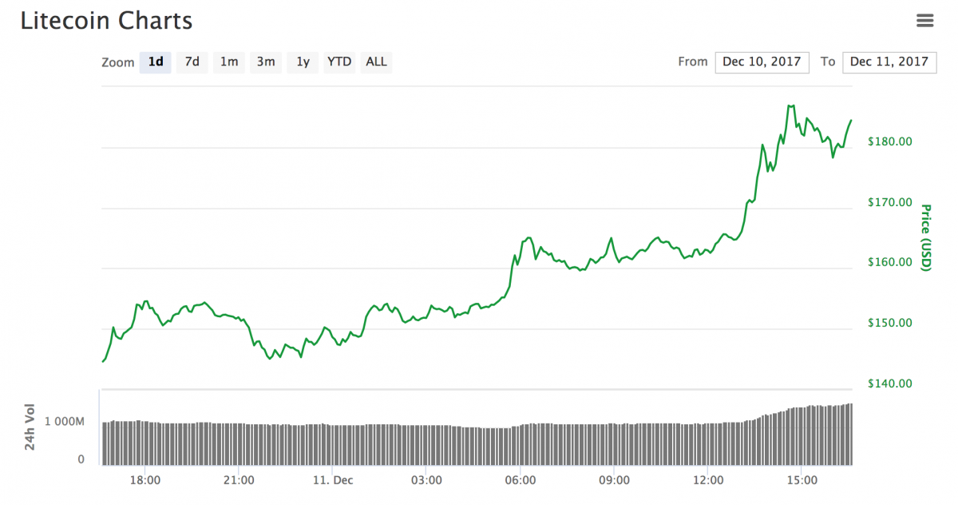 Several factors may be contributing to the explosive growth of Litecoin.

The recent launch of Bitcoin futures trading on Cboecaused a spike in Bitcoin prices. As Charles Bovaird notes, Litecoin’s behavior tends to have a direct relationship to Bitcoin’s. Especially as network speeds lag and transaction fees soar on Bitcoin, Litecoin may be an appealing trading alternative with its faster speeds and lower transaction costs.

Coinbase, the popular cryptocurrency brokerage, has also ballooned in user base alongside the growth of Bitcoin, recently surpassing YouTube as the #1 app on the Apple App Store. Coinbase currently only supports Bitcoin, Ethereum, and Litecoin—so the positive relationship between Bitcoin and Litecoin might be putting a special spotlight on Litecoin amid the rapid growth of Coinbase.

There is also speculation that Litecoin creator Charlie Lee’s recent media blitz, appearing on Squawk Alley and Glenn Beck, is contributing to its rapid ascent in price, giving him a pedestal to pitch Litecoin as the currency of fast transactions and daily use.

Whatever the case, December is one of the biggest months in the history of Litecoin, which has doubled its price in a matter of 4 days—moving toward the close of 2017 reflecting 4,315 percent growth year-to-date (YTD), up from $4.33 at the beginning of the year.

Editor’s Note & Disclosure: The author participates in cryptocurrency markets. Neither the author nor Forbes endorses participation in any token sale or cryptocurrency investment, all of which have significant inherent risk. Seek advice from a financial advisor as well as do your own due diligence before considering investment.

Jesse Damiani is Editor-at-Large of VRScout, Series Editor of Best American Experimental Writing, and CEO of Galatea, a writing and project management tool for AR and VR stories.